About an hour after the last photo in the last post.  We looked out of the window and saw to our horror 3 chickens the wrong side of our lovely new fox proof fencing!!!

Caught them both and one escaped twice more until we decided it was definitely bedtime!!

That was fun too ....  they didnt want to go to bed yet as it was still light, 20 minutes later all were tucked up in bed and we were on the internet looking up wing clipping!!!

Next morning all were clipped before being allowed out of the house, actually easier than I expected!

And that was the end of the flying chickens!!
Posted by caracroft at 10:00 No comments:

And onto the Chickens

We decided to get a recycled plastic Chicken House and this was erected very easily.  I thought this would be doing my eco - bit and also be easier to keep red mite free, as the only wood the chickens touch is their perches, so only one area to treat! 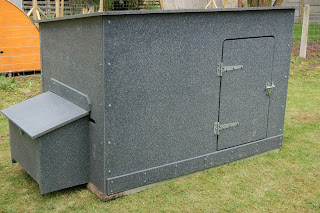 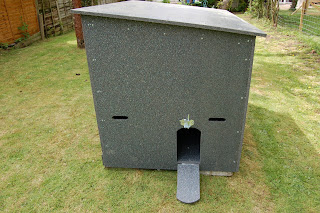 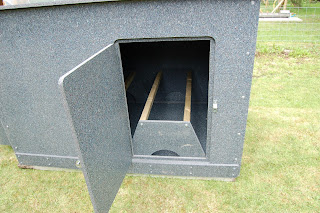 Finding chickens, again like the pigs, was difficult.  I must have rung 20 or more people who had all sold out of the type of chicken I wanted. In the end I found some Copper Black Hens quite nearby and we picked them up last week, 29th May 2013.  We decided to get  6 for now and they are 22 weeks old. 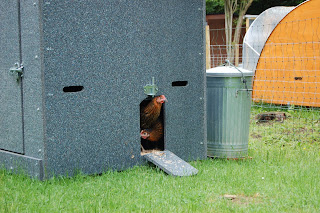 After being locked in for the recommended 24 hours, it took a couple of hours before anyone put their head out of the pophole! 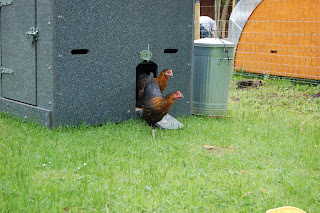 Bit by bit they came out - these were the first two ... 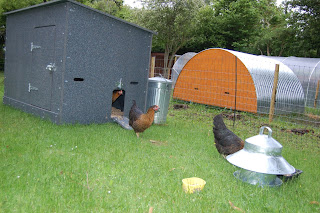 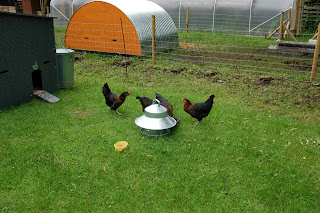 and then there were four! 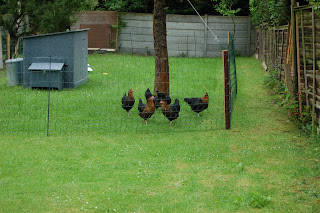 It wasn't until teatime that we actually saw all six birds!! 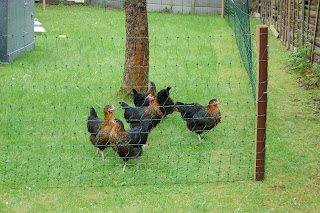 Aren't they gorgeous - black feathers with lovely golden, bronze and copper colours on their chest and round their neck.  The black on their backs looks like a deep green under the sun on some of the birds.
They came up to this corner as we were in the kitchen and this was the nearest point.

Pigs Arrive and House is erected!!

The day to pick up the pigs came quicker than expected.  We had tried several times to get weaners and they had always been sold.  But we saw an advert for pigs that would be ready in a couple of weeks.
When I rang them up they said we could see them the next day, 11th May and explained that their mum had sadly died of a twisted bowel.  As the piglets were doing very well and had weaned early and successfully anyway they said we were welcome to take them straight away!

We couldn't resist so after checking our choices over they were bundled into our trailer and we were off....

One problem the pigarc was still sitting at home flatpacked!! 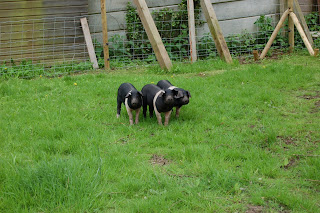 1st Picture of our new Saddlebacks - 2 gilts and a boar 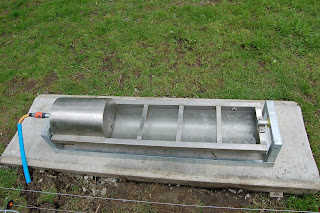 The Automatic drinker anchored down in place

So pigs successfully put in their pen, electric on and onto building the arc!!!  It was apparently possible to put together in 30 minutes!!  Not so .... 3 hours later after feeling a little panicky about getting it finished.  Voila!!  a nice new pig arc.  (after getting a severe shock when lifting a roof panel over the fence and catching the electric wire - ouch!)

Our new pigs enjoyed the straw outside the arc more than going inside but eventually when it was nearly dark they ventured in and we saw them all bundled in a corner. 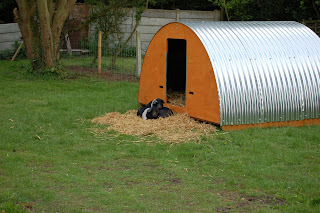 They always want to sleep in exactly the same place, so end up on top of each other!!! 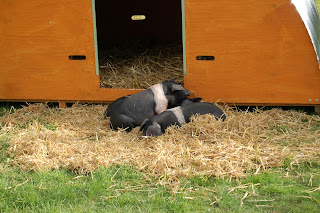 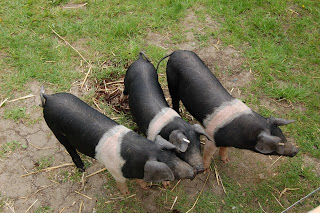 3 piggies already know that we are the ones with the food!!!

Posted by caracroft at 14:51 No comments: 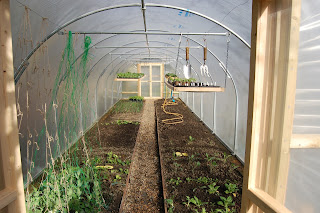 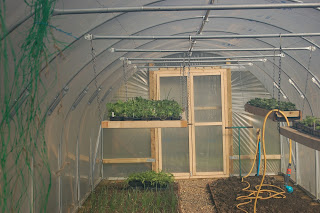 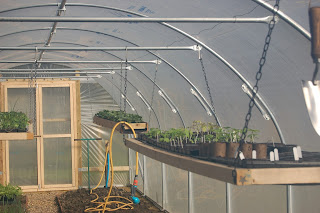 Suspended shelving is helping me have more room.  One of the shelves is full of strawberry plants and the other shelves have seedlings that will go in the ground later and maybe I might try selling some outside? Watch this space!
Everything is ahead of any plants that I would have had outside and it is a lot warmer inside the polytunnel with the spring we are having this year!
Posted by caracroft at 12:51 No comments: 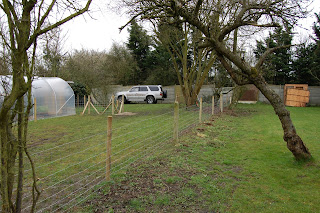 As you can see in the photo, we have a polytunnel, so we decided that we needed stock fencing and a 2 strand electric fence to keep the pigs away from it!!  This is us tensioning the stock fence with the 4 x 4!!! 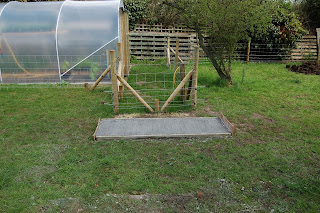 Electric Fence up and concrete in place for the water trough - we had had a digger in about this time last year and put down pipes through to the polytunnel and also to the area above for the pigs.

Posted by caracroft at 12:35 No comments: 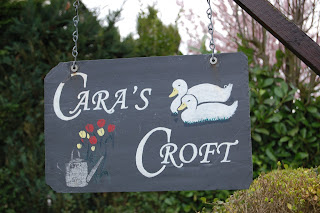 This is my original sign, when I had Aylesbury Ducks a few years ago, I think I need to redo it now, with pictures of pigs and chickens!!!
Posted by caracroft at 12:25 No comments:

caracroft
Essex, United Kingdom
Hi, Cara's Croft is a smallholding which is just starting out and this is my blog to let you know how I get on. Our goal ultimately is to be as self sufficient as possible. We started off with putting up a 40ft polytunnel. We are planning pigs and chickens and currently putting up fencing for them. Follow us and we will let you know how it all goes - the lows and the highs! Cara